Part of the reason Rob hired me was to help him differentiate between work and play, so he says. His work ethic is admirable and I hope one day to have the same ambition and motivation to sit for 16 hours at a time and grind out an edit or finish a project in one go. But finding a middle ground between work and fun is just as important as meeting deadlines and producing content.

We have been balancing the two quite well between hiking through state parks and trying to immerse ourselves in the truest parts of each state we visit. The part of New York we stayed in, for example, is well-known for it’s wine trails. Naturally, we had to visit a winery (that was actually four wineries in one) and try their unique flavors. And I may have gotten a bit drunk by the end of the whole thing. Check that out.

Growing up horseback riding and being as obsessed with animals as I am, we had to go riding in Kentucky. It wasn’t even a question. The leaves were changing, the weather was beautiful and I hadn’t been on a horse in at least two months.

I’ve dreamt of going to Nashville since I discovered what the city was all about. I grew up listening to country music with my dad in the backseat of the jeep, flying down back roads on crisp, summer days. Memories I will carry with me for the rest of my life. He introduced me to my love for music in many ways and although I can’t sing, I’ll always belt out those tunes in the car.

Of course, being the naïve five-year-old that I was, I assumed every single country music star lived in Nashville. I pictured flat landscapes, Taylor Swift strumming her guitar on the sidewalks, backlit bars on every single street corner, cowboy boots and ass-less chaps. Any stereotypical scene from an old Western film; you name it, I pictured it.

And I wanted to see it.

I always thought it would be with my mom or dad, never while traveling cross-country living in an RV full-time with a stranger. I keep using that line but realistically, Rob is anything but a stranger at this point and truthfully, I don’t think I would want to travel the country with anyone else doing anything different than what I am doing right now. (Right now I’m on an airplane flying to Chicago to catch my connecting flight to Boston for Thanksgiving – but you get the idea).

Nashville was absolutely nothing like I expected. We got to the city and instead of seeing those Western bars and saloons I had pictured, we were greeted by towering skyscrapers. Although, there were a lot of people walking around in cowboy hats and cowboy boots. No ass-less chaps, though. You can understand my disappointment, I’m sure.

Our first stop of the day was at the Country Music Hall of Fame which was also nothing like I had expected. Three floors full of names and pictures of musicians I had never heard of who helped shape what country music is today. They’d probably roll over in their graves if they heard the pop-style, modernized country that we’re listening to nowadays.

Our second stop was a little more exhilarating. Being the terrible influence that I am, Rob and I went to get tattoos. His first and my eighth (sorry Mom). Rob has this weird thing where if you explain things in too much scientific detail, he gets really nauseous so he wouldn’t let me explain the process of tattooing beforehand. He kind of went in blind but thankfully, my tattoo artist started before his so he was able to watch my reaction and get used to the sounds of the instruments and sights of the needles. 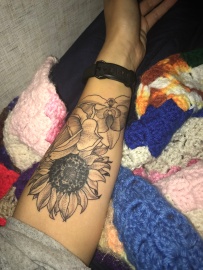 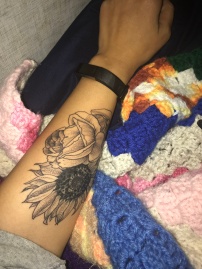 To end our five/six hours in the city, we went out on the strip. I don’t actually know what you call it but that’s what they would call it in Vegas and that’s exactly what it felt like.

We came to a traffic light on Broadway, which is the main street in downtown Nashville, and to our left and right as far as the eye could see, there were lit up signs for bars with recognizable names like Margaritaville and Jason Aldean’s. We were hesitant to settle on the first bar we stumbled across but excited to see the nightlife of the city since neither of us have gone out in a while. About two and a half months for me and roughly the same for Rob, that I know of.

It felt like there was so much to see and even if we spent the whole night there, we wouldn’t have seen it all.

Every single bar had live music streaming from it’s windows from rock, to country to pop. We stopped at the second or third bar we found and ended up having such a fun night. The band was incredible, sang newer country music and involved the crowd throughout their entire performance. They played classic songs as well as old classics and everyone was dancing around the stage and buying the band shots.

They also had this amazing fiddler player. I have heard people play the fiddle before but never the way she did. The Devil Went Down to Georgia is one of the most iconic songs known for its fiddling and she played it brilliantly. If we could have watched her play all night, we probably would have stayed and listened to her until they kicked us out. I had the chills the whole time she was on stage.

We drove back late but the exhaustion was well worth it for the night we had. I really hope to get back one day for a long weekend or something similar. Probably will end up having my bachelorette party there if I ever get married. Rob will definitely be invited to that girls night.

That’s the most amazing thing about this little journey – crossing off cities and statues of places I’ve longed to see since I learned there was more to the world than Cape Cod. I imagine it was like finding out the world wasn’t flat.

So much to explore, so much to do and see and I know there are more little adventures and places waiting for me to find them and fall in love with them.

i’m moving in about nine days. it’s safe to say the transition and the anticipation is the hardest and my anxiety has been on full alert. i was doing fairly well considering everything going on and i recently started a new medication that has taken the edge off of my anxiety and my irritability. either […]

I touch on the power of vulnerability. listening to shame, the long term effects of bullying and holding on to subconscious resentment.

I wanted to share a bit about my past with mental illness and the way self-isolation has heightened anxiety and depression, some symptoms to look out for and ways to battle your mental illness. Remember you’re not alone in this fight!

Part of my resolutions this year have included bettering myself; digging deep, uprooting those problems and fears that have taken home in the pits of my stomach and starving them of their fuel. Along with the more standard resolutions (reading more books, spending less time on my phone, working out consistently and trying to eat […]